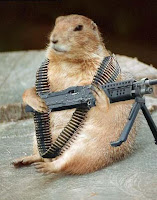 The other day a friend of mine told me how to catch a gopher. At first I was perplexed.

“Why do you want to catch a gopher?” I asked.

“To eat him!” was the matter of fact reply with an implied “Duh!” for punctuation.

I don’t know where any gopher holes are.

I’m not sure I really know what a gopher looks like.

I’m not sure I could really drag a fuzzy little creature out of a hole with a broom handle, nails and can contraption, look in his soft little eyes and then bean him (even if he is made of free meat).

Suddenly I realized my limitations as a child of the suburban middle class. While I was wasting my teen years gawking at A Clockwork Orange and David Bowie, my redneck counterparts were learning useful skills like automotive repair and gopher catching.

When the economy starts sliding and push comes to shove, what skill have I got? I know how to apply eye liner like Robert Smith. What about my redneck brethren? He’s smacking down gopher soup that he caught last night with a Busch Lite can.

The heat is on in our country and suddenly The Great Depression doesn’t look so much like ancient history. The rich are insulated with a fat pad of wealth and the brains to keep it. The poor were already in the middle of a fight to survive. It’s the middle class that gets the brunt of the shock wave.

In my two car, two and a half bath world it’s a nasty surprise to look around and think “What do you mean, I can’t afford milk?” It doesn’t compute to the Liz Claiborne and Areopostale set. It’s taking some of us a moment to let the new reality sink in. Driving and food are expensive. Computers and cars don’t really need to be upgraded every year. No, we can’t move up into a better neighborhood in the next six months.

My gophers-as-food conversation brought to my attention, however, that there is a valuable subculture among us that can help us all, if we can keep from turning our noses up. Like the Indians showed the early pilgrims how to hunt and grow corn, our twangy accented neighbors suddenly seem invaluable for their do-it-yourselfer ways.

A few days later I had another short conversation that made me re-evaluate our nations middle class values. At the school where I work I was urging children to look through the heaps of lost & found items that had gathered on the cafeteria stage before they were donated to charity.

“Make sure you look for any lost items!” I reminded an Abercrombie & Fitch clad mini fashionista as she cruised by without a glance. She waved a rhinestone covered hand dismissively in my direction.

“My mom never wants me to bring back items if they have been in the lost & found.” she declared with a sniff. “They might have cooties.”

Amazed, I thought “Good for her!”

One of these days her mom will look around and realize that her credit’s run up and American Express is no longer her friend. In the meantime, I’ll take her $75 cast off pullover home with me. I have an old fashioned machine called a ‘warsher’ that kills cooties, and I need something to wear while sitting around the fire pit enjoying my Fuzzy Catch of the Day Fricassee.’

Originally posted on January 23rd, 2008,
Redneck Economics has been one of the most popular posts
ever to appear on my blog.

Besides making numerous online appearances
and being forwarded into inboxes everywhere,
the opening lines of Redneck Economics were selected
as Wisebread’s  Quote of the Week.

Hope you enjoy this flashback!

Angela Yuriko Smith is an American poet, publisher and author. Her first collection of poetry, In Favor of Pain, was nominated for an 2017 Elgin Award. Her latest novella, Bitter Suites, is a 2018 Bram Stoker Awards® Finalist. Currently, she publishes Space and Time magazine, a 53 year old publication dedicated to fantasy, horror and science fiction. For more information visit SpaceandTimeMagazine.com or AngelaYSmith.com.
View all posts by Angela Yuriko Smith →
This entry was posted in Uncategorized and tagged consumerism, down home wisdom, economy in trouble, survival, tightwad, WiseBread. Bookmark the permalink.