Review: He Died with a Falafel in His Hand 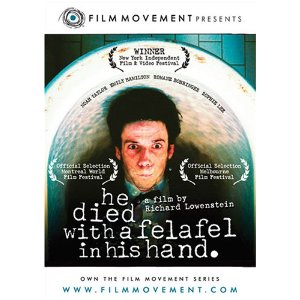 Sometimes the palate craves more then simple sweet in a dessert.  It craves texture, depth and innuendo.  In the same way sometimes we crave more then obvious humor in a movie.  We wish for something delectable that leaves an introspective aftertaste in our minds.

For those in the mood for a rare dish with a piquant sauce, look no further then He Died with a Felafel in His Hand (Richard Lowenstein, 2001).

Danny (Noah Taylor) is a writer that doesn’t write.  In love with the idea of his art, he lives out the life of a tortured artist with a series of bizarre flatmates.  While he smokes, quotes and stares at his vintage typewriter waiting for inspiration to strike, it’s usually his roomies that deliver the blows that keeps viewers in stitches with plenty of mental slapstick.

Danny mirrors the artist in all of us with his self absorbed obsession with his own genius.  The situations are on the bizarre side, but anyone with a wild streak will be reminiscing about similar experiences.  Intelligent humor seasoned with melancholy, this wonderful aussi film is a treat best served often and with friends.

The official selection of both the Melbourne and the Montreal World Film Festivals, and winner of the New York Independent Film & Video Festival, He Died with a Felafel in His Hand is a raucous and improbable romp that will leave you satisfied and full of thought.