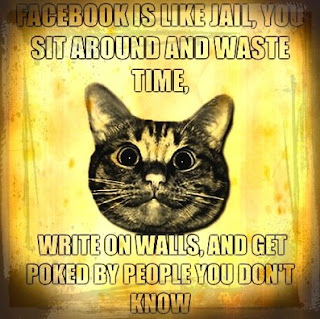 How many times lately have you seen careers ruined from FaceBook usage?  Type “facebook ruins” into Google and you’ll find thousands of entries blaming the social networking site for everything from failed marriages and trashed friendships to careers going up in flames.

No one seems immune either.  Famous athletes and actors seem prone lately to posting inappropriate comments up on the web, causing carefully built careers to be smashed under viral outrage.

Your internet image is as important as your physical image.  Few people would smoke pot at work, but how many wild party pics are posted online everyday?

NewsFlash!  Your boss, and anyone else with internet, is stalking you.  Don’t post your dirty laundry if you don’t want it seen by the neighbors.

FaceBook, like guns, money and booze, should be considered amoral.  These items are neither evil nor good.  They can’t make anyone do anything, people should feel responsible for the consequences from their misuse.  If there is no one to pull the trigger, there is no danger.  If you don’t post inappropriate material you won’t get fired.

That being said, FaceBook, and the internet in general, is an incredible tool.  New concepts like cloud computing, are changing the the way we live.  From your desk you can now shop, date, mail packages, chat with anyone, go dancing, have a business meeting, publish a book, attend a conference, report a robbery in progress…. the possibilities are as vast as the internet itself.

Use the net it for what it is, but like anything, use with common sense.  You wouldn’t take a stroll in a bad part of town with money sticking out of your pockets, and you shouldn’t post photos of last night’s crazy party after you called in sick to work.

Angela Yuriko Smith is an American poet, publisher and author. Her first collection of poetry, In Favor of Pain, was nominated for an 2017 Elgin Award. Her latest novella, Bitter Suites, is a 2018 Bram Stoker Awards® Finalist. Currently, she publishes Space and Time magazine, a 53 year old publication dedicated to fantasy, horror and science fiction. For more information visit SpaceandTimeMagazine.com or AngelaYSmith.com.
View all posts by Angela Yuriko Smith →
This entry was posted in Uncategorized and tagged FaceBook, FaceBook Ruins. Bookmark the permalink.