The Great Xbox 360 Conspiracy, & How To Fix Yours 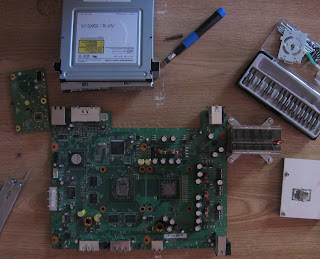 The Red Ring of Death… ask Google about it and you’ll get back around 5,210,000 results back.  That is a lot of broken Xboxes… and a lot of regular income for Microsoft.

Many people suspect Microsoft of implementing planned obsolescence, basically building a ‘fail by’ date into their product so that they are ensured a continual customer flow.

When the average game costs $50 US ($100 plus Aus), most people are inspired to replace a machine rather then toss their game library.  But when you shell out $300 – $500 for the machine in the first place, it hardly seems fair to have a built in expiry date.

My theory is that the Red Ring of Death is triggered by downloads.  Here in Australia we have download caps on our internet so we rarely get online content.  Our Xbox 360 has been fine for 3 – 4 years with no downloads.  When content was downloaded to the Xbox for the first time, within 2 weeks it was infected with the Red Ring.

We managed to fix it using the online tutorials linked below, and it worked perfectly for another 6 months… until we downloaded a game patch.  Within days we had a dead Xbox again.  I’d say it was coincidence, but my kids in the US download to their Xbox regularly, and they have an Xbox graveyard in their closet.

I just fixed our Xbox for the second time and it works great…until we loaded up the downloaded content.  I suspect that embedded in the ‘free’ content Microsoft generously offers, there must be a kill code of some sort.  I plan to fix the machine once more, and then not touch any downloaded content and see what happens.

In the meantime, by following these excellent tutorials linked below, we managed to get 6 more months out of our machine for a few hours worth of work, definitely worth the effort.  And now… I’m off to tear apart an Xbox (again).

Angela Yuriko Smith is an American poet, publisher, and author with over 20 years of experience in newspaper journalism. She co-publishes Space and Time magazine with author husband Ryan Aussie Smith. For more information visit SpaceandTime.net
View all posts by Angela Yuriko Smith →
This entry was posted in Uncategorized and tagged DIY Xbox 360 fix, fix your xbox, fix your xbox 360, Red ring of death, save money, xbox. Bookmark the permalink.