Machinima Magic in the Making 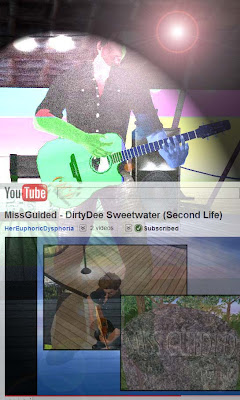 Once again I’ve had the privilege of participating in the making of a machinima under the careful production of Kira Madrigal. You may recognize the name from my earlier posts on Pop Art Lab’s incredible expo. The whole experience won me over as a fan and advocate of machinima.

This time I got to participate by building a set, one of our early outfits shows up in it and I even have a bit part myself (as an angry mom :p) Building a movie set in a virtual environment was the most enjoyable part to me. There were no heavy materials to lug around, expensive waste or splinters. In about an hour the entire bedroom in the video was up and ready for filming.

Seeing my flimsy fabrication turn into a girl’s room in the actual production was pure magic. There are few things as rewarding as creating from pure imagination. I feel a bit like Barney the Dinosaur with his magic imagination bag. But enough of my experiences, I want you to go watch the film for yourself and tell me what you think.

Before I turn you over to this visual treat, though, I’d like to introduce you to the key players that made this production possible. The original music, titled Miss Guided, is by a long time friend and extremely talented musician, known virtually as DirtyDee Sweetwater.

Dee is a professional performer with charm and talent following him around almost as thick as as his fans. Dee started his musical career in his early teens in the US, and performs regularly in venues both virtual and physical. The song featured is written by him, a beautiful ballad that sings to a girl that can’t see her own worth, and his desire to “trade her bad for good”.

One of the reasons I think that this song strikes such a chord with so many is that it sings directly to the part of ourselves that we’d like to hide. Inside even the most outgoing person there is another shyer person hiding behind their eyes, peeking out sometimes to question their worth. I know I have one.

The individual orchestrating the visuals is very special to me, and I am so excited to see her unique vision of the world being translated for the rest of us to see. She paints mood in pixels and lighting, and is developing herself to be a highly professional machinima creator that is producing commercially as well as purely artistically.

Dissatisfied with merely creating moving images set to music, Kira Madrigal has an intense devotion to the story playing out in much of her work. In this story we see a young woman, the Miss Guided from Dee’s song, as she tries to break free of the prison created by her lack of self esteem. Her life is the the epitome of middle class adolescent angst, she has everything but can only see what she lacks.

A few minor notes; I’m the angry mom in the frozen ‘fight’ image midway through, and the shirt that I’m wearing was created by one of my favorite designers, Yohane Rockett of Strayer. The white and gold ‘princess dress’ in one scene was one of our earliest releases, now retired. The whole thing was filmed on a platform above our shop area and in the public park land we are lucky enough to be adjacent to.

I hope you enjoy this production, I see lo fidelity film making as having a bright future, and Paramount Pictures agrees with me as proven by their recent creation of Insurge Pictures, a production arm dedicated to proving that creativity can be profitable.

The technology available for small productions such as this means that excellent music videos are no longer regulated to the bands with bucks. I hope you enjoy, and all my best wishes to these two excellent artists… give us more!

The prior post has the video embedded for your convenience, or go to Kira Madrigal’s YouTube channel to watch more of what she’s doing.

Angela Yuriko Smith is an American poet, publisher and author. Her first collection of poetry, In Favor of Pain, was nominated for an 2017 Elgin Award. Her latest novella, Bitter Suites, is a 2018 Bram Stoker Awards® Finalist. Currently, she publishes Space and Time magazine, a 53 year old publication dedicated to fantasy, horror and science fiction. For more information visit SpaceandTimeMagazine.com or AngelaYSmith.com.
View all posts by Angela Yuriko Smith →
This entry was posted in Uncategorized and tagged DirtyDee Sweetwater, Insurge Pictures, machinima, Pop Art Lab. Bookmark the permalink.