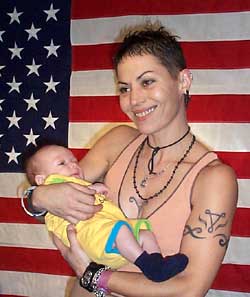 Originally published on 8 October 2001 at militarylifestyle.com

Joan Jett may love rock-n-roll, but she loves the military, too. The Kirtland, N.M., AFB Thunderbird Dining Facility became Blackheart heaven for fans of the Jett set. At her own request, Joan Jett and band members Thommy Price and Dougie Needles took time out from their exhausting performance schedule to show their support for the troops. In appreciation, the troops flocked in with guitars and record albums ready to be signed.

Colonels and master sergeants crowded in line with punked-out music lovers. All of them were equally eager to have a few words with one of rock-n-roll’s legendary female performers. Strikingly posed against the backdrop of a giant American flag, Joan Jett answered questions with a smile. She obligingly posed for pictures, cuddled babies and signed a phonebook-sized stack of photos. Joan’s attitude was friendly and accessible.

Joan posed for one last photo, and then she and the band were off for another appearance at the Kirtland Base Exchange. The line of fans streamed out into the food court for autographs. Manager Kenny Laguna, who has been with Joan from the beginning, took time out to talk with me about the bands’ special interest in the military troops.

When Joan Jett and the Blackhearts made it big overseas, they made a point of showing the military troops their support. “Wherever we went, if there was a base, we would just go on the base. It was never set up. We were always able to lock up through AFM with the commanders.” Traveling through places such as Lebanon, Bosnia, and Kosovo, they signed their way into the hearts of grateful fans stationed away from home. “These wonderful, beautiful kids in the military really appreciate the appearance and just the music in general.” Said Laguna.

From Albuquerque, Joan Jett and the Blackhearts will be headed to Cuba, Iceland, and the Middle East to rock foreign soils with their message of hope and encouragement. “In our own little way we’re part of it.” says Laguna.

Joan Jett, whose father is a veteran of Korea, doesn’t seek publicity for her special appearances to soldiers. She believes, with her band and Kenny Laguna, that some things must come from the heart. In addition to supporting our nation’s troops, they work to help child victims of leukemia and the widows and orphans of the police.

Supporting the police force along with the military is even more important to these mega musicians then ever. With offices, homes, and apartments in New York, the band has been reeling with fellow New Yorkers from September’s tragedy. In shock with the rest of America, the national inpouring of assistance nevertheless heartened them.

“It’s a city that we love so dearly. We’re still getting over the shock. One amazing thing is that we feel like the whole country finally realized that New York is a part of the United States.  We felt like the relative that wasn’t appreciated until we got in trouble, and then the whole country was there.” Laguna said.

Joan Jett and the Blackhearts, along with Kenny Laguna, would like to express their appreciation to military members all over the world who are dedicating their lives to keeping America united and free. “It’s the greatest fighting force in the history of the world. They put their a**s on the line for us all the time, and we love ’em for it.”

The feeling is mutual.

Authors Note:  This is part of my past work and was originally published for militarylifestyle.com on 8 October 2001 under my former byline of Angela Yuriko Cato.