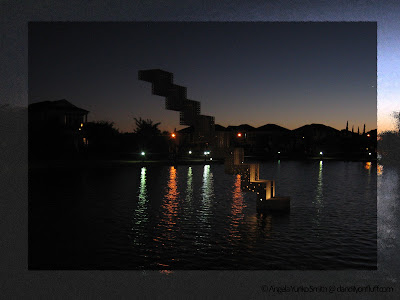 I once knew of a very strange and wonderful man.  I saw him everyday when I’d take my kids to school, and though I never met him or knew his name, he made a big difference in my life.

Tall and lanky, he was always wearing work out shorts that accentuated his long legs, but it wasn’t his short shorts that made him stand out.  It was his smile.

Every single morning, whatever the weather, I’d pass that old man walking on the side of the road, and every single time I passed him he’d give me a wave and a big smile.

At first I thought he was nuts, and I was a little offended.  I didn’t know him, why did he wave at me?  Did he want money, was he flirting, or was he just crazy…?  I started looking for him in the morning, and I noticed he wasn’t singling me out.  He gave every car that passed him the same big grin and cheery wave.  I started thinking of him as a friend, although we’d never met.

Years passed, and he vanished for a few months.  I worried that something had happened to him.  Then he was back, still waving.  He walked slower and I noticed he now used a cane, but there he was anyways, as sure as the sunrise, to be my roadside greeter.  I told myself that one day I’d stop and tell him how much I appreciated him, but it seemed I was always rushing somewhere and I never had the time.

Fate would have it that I wound up moving into the apartments across from his house.  Here was my perfect opportunity to give him confirmation that his smiles had an effect, all I had to do was walk across the street.  I spent hours sitting outside my apartment, looking at his house while chatting with my neighbors, but I somehow never found the time to cross the road.

One day I came home to see ambulances parked in front of his house, and I was told that he had been diagnosed with Alzheimer’s and decided to take his own life rather then lose who he was.  My chance was lost.

I don’t know if it would have made a difference to his decision, but I do know that I had a chance to give something back, and I took it for granted until it was gone.  It’s my loss, not his.

Life is a tenuous thing, and we never know when someone walks out of our life with our last chance to tell them how much they mean to us.  The daily grind dulls our senses and we get lost in the rut of doing rather then living.  For the rest of my life I hope I don’t forget the valuable lesson that my nameless, waving friend taught me:  never miss a chance to say hello.

Angela Yuriko Smith is an American poet, publisher, and author with over 20 years of experience in newspaper journalism. She co-publishes Space and Time magazine with author husband Ryan Aussie Smith. For more information visit SpaceandTime.net
View all posts by Angela Yuriko Smith →
This entry was posted in Uncategorized and tagged alzheimers, elderly, fort walton beach, inspirational. Bookmark the permalink.

18 Responses to Never Miss Your Chance