Quick! Arnold for President While You Can! 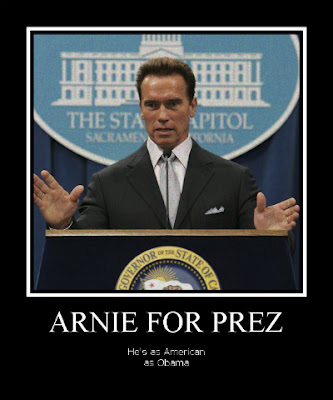 I just read that the state of Arizona recently passed a bill that makes presidential hopefuls present their birth certificates to prove US citizenship.

Two thoughts went through my mind.  The first was, we don’t already do that?  Just to get a driver’s license I had to bring not only two forms of photo ID in addition to my old license, but three pieces of mail to prove I lived where I said I did as well.  Do presidential hopefuls not have to do that?

My second thought was, if proof of citizenship by birth isn’t really required, then let’s nominate Arnold Schwarzenegger for president.

He’s done a good job in California, those hardcore patriots love him despite his Austrian heritage and at this rate I think putting a trained monkey in the white house would be an improvement.  For an epic bonus, he actually has real political experience!

There’s my nomination for the 2012 elections, Arnie for Prez… because we’d rather have an American foreigner in the white house then just a foreigner.

Author’s Note:  No actual politicians were hurt in the making of this blog post.  The author is a political agnostic and has no strong views for or against any political party and discounts any particular politician’s claims of Godhood.

Angela Yuriko Smith is an American poet, publisher, and author with over 20 years of experience in newspaper journalism. She co-publishes Space and Time magazine with author husband Ryan Aussie Smith. For more information visit SpaceandTime.net
View all posts by Angela Yuriko Smith →
This entry was posted in Uncategorized. Bookmark the permalink.