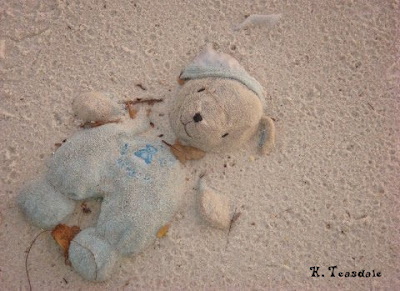 The Emerald Coast, once considered one of the best beaches on the North American continent, now sits in ruin one year after the BP disaster.  Like oil on the waves, memories ride on the surface of our minds, coloring our vision of the new way of life facing those that remain.

Of those that remain, I’m not one.  I was laid off from my job last year when the school I worked for thought they better cut back in the uncertain times that followed in the wake of the spill.  The oil remains along with the pain, a hint of it colors the surface while the bulk of it lies thick in the depths, killing the soul of the coast.

Today I want to step back and give the floor to those that have remained over the past year.  I thank Janice Brown for taking the time to share her experiences and thoughts on this, the first anniversary of the day the ocean started dying.  I’d also like to thank the talented photographer, H. Teasdale, for allowing me to use her photo to accompany this story.  To me the lost bear, forgotten in the sand, epitomizes the spirit of what’s left; the emerald coast has lost it’s innocence and there’s no more time for play.  Thank you to both of you for lending your talents and experiences in memory of our lost ocean playground.

Reflections of Life After BP by Janice Brown

I live at the edge of one of the most beautiful beaches in the world. A beachfront condo on the waters of the Gulf of Mexico was my home from April through December of 2010. At the time, I didn’t know that my sojourn would leave me with a hoard of unhappy ailments that threaten my body and my mind. Fear of sickness and never feeling normal again try to crowd out my “living a long happy life” thoughts.

It all begins one crystal clear day in April, the 20th to be exact, the day the gulf dies and leaves a permanent mark on many of its nearby residents. We just don’t know it yet.

In the panhandle of Florida, tar balls and oil finally show up on land in June 2010. For only a few days out of the summer the water turns brown and glassy, swelling with toxic sludge. The sand is mostly snow white. I take pictures of the sunsets almost every day. They all look like just another idyllic day in paradise, except for the occasional paper-suit clad worker walking up and down the sand, picking up gooey reminders that everything is not as perfect as it seems.

I run a lot this summer- four miles round trip to the end of the island and back, trekking over the beach or on the road. It’s my daily feel good therapy. A couple of days I smell fuel. In July, I think I have a cold and then I have two gushing nosebleeds about a week apart. My nose never bleeds. My arms start going numb in my sleep most nights. Maybe I am sleeping on them wrong I’m thinking.

It is so hard to remember anything for my college classes. I’m a mostly “A” student. Why am I struggling so hard to come up with B’s? I’m still feeling blessed to be staying in a beachfront condo all summer because no one else wants to. My underarms and breasts hurt! I just ignore it, maybe it will go away. August rolls into December. Then, the New Year 2011 is here and it’s time to leave the beach. Symptoms are piling up but I am adept at ignoring them, comfortably ensconced in my tough, Superwoman persona.

February 2011, running is a lot harder than it used to be. I am still pushing myself, but just the thought of a three mile easy run exhausts me. March 2011 I’ve stopped running. I’m just too damn tired, and out of breath. I don’t sleep much at night because of the growing pain in the joints of my hands and the numbness and tingling in my arms. I think one day I am going to wake up and my arms are going to be on the floor across the room waving at me. Is that ringing my phone? No, it’s just the constant ringing in my ears I can’t get away from. I’m thinking menopause must have hit me really hard because hot flashes take a hold of me almost every thirty minutes like an alien invading my body. After that the chills usually show up like a Jehovah’s Witness at my door and won’t leave…until the next hot flash. I googled all my symptoms at once and the fifth hit happened to be something on the after effects of the Exxon Valdez oil spill in Alaska- weird I think.

It’s March 2011 and I’ve had to soap up my hands to pry the rings off of my fingers, because they seem to grow and swell by the minute…and hurt. I talk to a friend who worked on beach cleanup last summer for BP along with her boyfriend. We compare health notes and I finally realize I’m not, crazy, old, arthritic and forgetful after all! I’m toxic! Is this good news? Does this mean there is an end to this?

I look at a health symptom questionnaire from a law firm involving the oil spill. My symptoms are all there, lined up neatly in boxes waiting for checkmarks.

Today is April 17, 2011. I went to a medical doctor a few weeks ago. She did blood tests for hormones, thyroid, CBC, but not for toxic chemicals or heavy metals. She patted me on the head, figuratively speaking, and prescribed me some sleeping pills. Huh? I don’t want to sleep through my arms falling off, I want to get well! I ignore the prescription and buy a bottle of booze instead. At least I already know the side effects of that. The internet is my medical friend so I start searching for something to help…French clay baths? Weird, but I already have some clay at home for facial masks so I try it…it helps some. My hands don’t hurt so much. I still have all the other symptoms, but not quite as bad.

So now my road to recovery is leading me to holistic doctors who don’t think I’m just going through menopause or maybe I just need more sleeping pills. The sad truth is that lots of people are sick. Many are much sicker than me. Many, like me, don’t have money for expensive medical treatments. Many have not yet connected their health issues to the oil spill. Many more will become sick and possibly die from some sort of cancer due to a big corporation who is still spraying toxic chemicals on top of toxic crude oil to hide their toxic waste dump at the bottom of the sparkling waters of the Gulf of Mexico.

2 Responses to Remembering the BP Oil Spill One Year Later