How Farmville is Harvesting Us 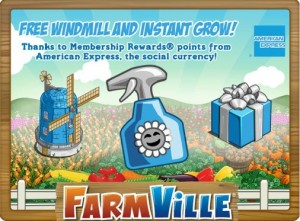 When it comes to marketing, nothing is sacred.  Farmville, one of the most popular social games on Facebook, is turning into a major commercial influence.

There is real value in virtual goods, so much value that some businesses are taking advantage of the low-cost/big returns that pixel prizes yield.

Farmville has recently partnered up with American Express and Lady Gaga to offer special themed gifts to its masses.  In the past they’ve promoted the movie MegaMind and State Farm Insurance.  Worldwide there are more than 46 million people playing this highly addictive game each month.  That’s a powerful captive audience.  So powerful, now some companies, such as Crowdflower, offer to pay in Zynga/Farmville dollars.

For those on the giving end, the desire to work for cyber currencies is a huge boon.  The only cost for the creation of such prizes is the initial design, the resulting product can be replicated and given away infinately.

The first time I ever came across this idea was years ago when I joined a virtual world designed to advertise Coca Cola.  At the time I scoffed… why would I fill out surveys to recieve fake clothes and furniture?  Little did I know that in a few years I would be taking advantage of the concept myself through Second Life.

Turns out Farmville goodies are an effective training tool as well.  As a player myself, I recently accepted the signature blue windmill offered by American Express, and a free insta-grow potion.  Essentially, American Express gave me the experience of instant gratification.  I was able to effortlessly progress using my farm version of American Express.  Now, anytime I want to move ahead I can use my Amex windmill to instantly get what I want…  just like in real life.

Farmville is a fun game and I confess to being addicted myself.  As a consumer though, I find I need to constantly think about the decisions I make to see if these choices are really mine, or am I mindlessly doing as I’ve been told.  I love my Farmville and am in line with everyone else waiting for my special prizes.  I just have to constantly remind myself that collecting virtual sheep doesn’t mean I am one.

2 Responses to How Farmville is Harvesting Us