Merilyn Dignum is our author of the day and she is giving away copies of both her books – Ties That Bond, Book 1, and Deception, Book 2 – from Smashwords  (enter via rafflecopter below!). She also happens to be from Adelaide, South Australia where Mr. Smith comes from :)

To celebrate the brand new release of Deception, her book, Ties That Bond, is currently on sale for .99 and there is a giveaway running on Merilyn Dignum’s page for Deception… and if that weren’t enough, today she is a guest poster on Dandilyon Fluff:

What if a parallel Universe existed? Would there be consequences for any offspring that carried the mix of DNA from both?

Ties That Bond is the story of Mia, who at a very early age developed abilities that allow her to channel her emotions through touch. These abilities have helped her survive on the streets where she has been on the run, and living off the grid, since she was twelve. 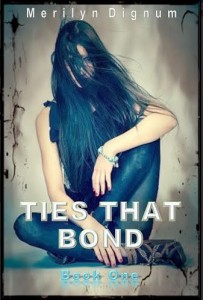 At seventeen she stumbles across a small group who survive underground by doing jobs for ‘clients’ from all walks of life. She now finally feels like she belongs somewhere. Life finally looks good. That is until the group takes in a new member and trouble arrives soon after.

As she struggles to stay ahead of those who want to capture her, and take advantage of her abilities, she discovers the truth behind her unique genetics, and she discovers she’s not alone. Deception (Ties That Bond Book 2) is a continuation of the lives of Mia and her friends, but a whole new adventure.

They’ve left the destruction of their old home, and the death of their friends, behind them, and are focusing on the future. They now have a permanent home, Mia has found love with Nate, and with his help she is gaining control of her abilities, and in the process discovering her true self. However, the arrival of a package will again turn her life upside down.

She is tricked into a world she wants nothing to do with, and becomes a reluctant participant in someone else’s plan. She can’t refuse to do what they want without risking the life of one of her closest friends, something she is not prepared to do, and as she is drawn further into that world the lives of more of her friends will be at risk.

I do read a wide range of genres, but I’ve always loved Science Fiction and Fantasy, even as a young child, so I guess it’s not surprising that my writing has elements of those genres in it.

I did try writing a crime thriller once, but not too far into it a creature appeared that could not be of this world, and wouldn’t go away. That changed the story completely. One day I just might dust that manuscript off.