Continuing this week’s celebration of the women of horror, the prolific and wonderfully dark A. F. Stewart takes over with a guest post on one of my personal favorite topics—female villains. Please take a minute to visit A. F. Stewart on her blog, Are You Afraid of the Dark, and explore her second book in the Killers and Demons series or visit the complete list of all of A.F. Stewart’s work. 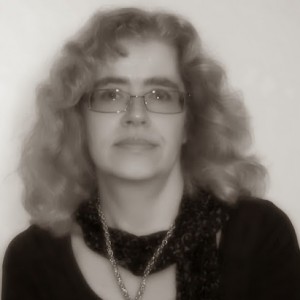 From A. F. Stewart: Traditionally, horror villains are male, and it’s often their victims that are women. And in the first book of my Killers and Demons horror series, four out of five of the short stories fell in line with that tradition. When I went to write the second book in the series, the thought occurred to me that it wasn’t fair to let the guys have all the fun, so I deliberately set about to write some female villains. Apparently, the ladies enjoyed the mayhem spotlight, as they had a starring role in ten out of the thirteen stories.

Our first lady of horror, Hannah, steps out the of fog of Victorian London, at first glance a victim but soon shows her true mettle after meeting another someone who is not what he seems. One reviewer called the story a “different kind of Jack the Ripper” and I think that’s quite fitting. 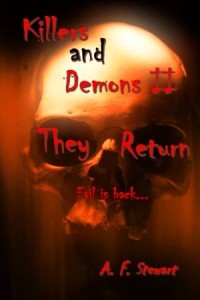 Our next few women, Zoe, Mabel, Millicent and Jane, and Emmeline, revel in the chaos of the dark side and take domestic disorder to a new level. From a fatal matrimony tug of war to nuptial hate serial killer style, from a twist on the marry for money scheme to revenge from beyond the grave, my homicidal wives and girlfriends get a little murderous payback. These ladies have had enough of their male counterparts condescending attitudes and go to deadly extremes to end their bad relationships.

My next lady, Sarah, is quite the opposite. She isn’t looking to get out of a liaison, she just wants to belong and be loved. The trouble is… well let’s just say she has some appetite issues. And when she finds her true family origins, some decisions to make.

Gabrielle finds her lethal secrets come back to haunt her—literally—and must face the truth of what she has done. But in true villain style, she has no remorse, right until the end.

And now we come to my troubled youth. One unhappy teenager, Amanda, and two seemingly sweet little girls. Amanda is your typical social outcast, few friends, having trouble fitting in or being noticed. Then the wrong thing notices her, and she loves it with full-on teenage obsession. With my child villains, I show that size doesn’t matter when it comes to wicked intentions. They might be small but they can be as vicious as the next woman. A lot of evil lurks under the adorable cherubic faces of Alice and the Dollmaker.

So you see, women can play with the sharp pointy instruments, the poisons, and the supposed “accidents” too. And have just as much fun.

Angela Yuriko Smith is an American poet, publisher and author. Her first collection of poetry, In Favor of Pain, was nominated for an 2017 Elgin Award. Her latest novella, Bitter Suites, is a 2018 Bram Stoker Awards® Finalist. Currently, she publishes Space and Time magazine, a 53 year old publication dedicated to fantasy, horror and science fiction. For more information visit SpaceandTimeMagazine.com or AngelaYSmith.com.
View all posts by Angela Yuriko Smith →
This entry was posted in Writing Life. Bookmark the permalink.